PORT SHEPSTONE – President Cyril Ramaphosa has taken a broad swipe at former President Jacob Zuma’s governance of the state while reflecting on how the country has been rescued from a downward spiral.

Ramaphosa was addressing a community meeting in the South Coast of KwaZulu Natal after visiting several areas throughout the day.

The ruling party is in full election campaign mode with its top six leaders and NEC members spread across all eleven regions in the province.

On Tuesday morning Ramaphosa is expected to lay wreaths at the gravesite of one of the ANC’s founding father’s in Inanda as a part of the organisation’s 107th anniversary which is being commemorated today. 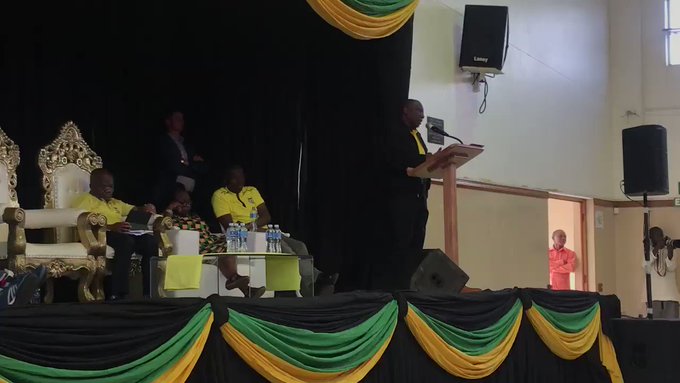 #January8 Ramaphosa says all those found guilty of corruption will be jailed. He says their focus now continue being about service delivery in communities.

Students Gathered At Rhodes University In Honour Of Khesani Maseko

Johannesburg: Students have gathered at Rhodes University to march to the Monument Building in honour of the late SRC member and political activists Khesani Maseko. It is understood that Maseko committed suicide after she was raped in May this year by her alleged boyfriend. According to reports Maseko hanged herself at her home in Johannesburg […]

Captain Luuk de Jong struck a late equaliser for PSV Eindhoven as they drew 2-2 with Tottenham Hotspur on Wednesday, a result that did little for either side’s Champions League ambitions. Hirving Lozano’s deflected effort gave PSV the lead after 30 minutes of the Group B clash but Lucas Moura equalised before half-time, and when […]

TSWHANE:Mamelodi Sundowns midfielder Andile Jali has been granted bail after being charged for alleged domestic violence and damage to property on Monday morning. According to sources, Gauteng Provincial spokesperson for the South African Police Service (SAPS), Lieutenant Colonel Lungelo Dlamini, revealed that the investigation is ongoing despite being granted bail at an undisclosed fee. The troubled star was present […]